Declare Independence – A Reflection on Bjork

This may be hard to believe, but last night I attended my very first concert.

Sure, I’ve been to shows at bars and intimate settings. I love music and will see it where and when I can. In the past year or two, I’ve been fortunate enough to see Loreena McKennit, hear the NAC Orchestra play several times, countless amazing ballets, but those were in intimate settings, more private affairs, as wonderful and amazing as they were.

I’ve never been to a big outdoor festival, or a large arena show, however. I’ve always wanted to go to one and it’s always been a dream experience of mine. I’ve seen tons of musicals though: Jesus Christ Superstar, Phantom of the Opera, Les Miserables, Wicked, Rent, West Side Story. I’ve had chances to see Bob Dylan and Britney Spears, but those didn’t pan out.

So it was to my great joy that my boyfriend got us tickets to go and see Bjork at Bluesfest. This was amazing for two reasons: Out of everyone that I listen to on a regular basis (David Bowie, Ke$ha, Patty Griffin, Robyn, Laurie Anderson, Lady Gaga, Serena Ryder, Madonna, Metric), Bjork is my absolute favorite.

It’s hard to explain to non-Bjork lovers why I will listen to anything she does. Ever since I heard the album Post for the first time, the dark opening tones of Army of Me or the surprising its Oh So Quiet or when I first heard the shadowy and almost claustrophobic sounds of Headphones. I can’t describe it. It was love at first listen. I went back and got a cassette of Debut and was even more in love.

It was music as I’d never heard it before. Up until that point, I had listened to a lot of different music from a variety of bands. There was a bit of ACDC, The Rolling Stones, ABBA. Even some ZZ Top, Led Zepplin, Boston, The Beatles thrown into the mix. Bjork was different for me.

The sound of Debut and Post were sort of similar, but they showed a shift in her music, a change. When she came out with Homogenic, my feelings were confirmed-she was a true musical artist. I listened to Homogenic while attending university and it suited the mood perfectly; the follow up to post, Telegram, even more so.

As I’ve changed, so has Bjork’s music. Homogenic was big band meets electronica and then another morph: Medulla was done completely without instruments, only with the power of voices, though you wouldn’t know it. Then came the soundtrack from Dancer in the Dark titled Selmasongs, both the album and the movie incredible. Then came the island influenced Volta. Biophilia, Bjorks latest, went in a whole new direction entirely.

It was the first app album that was then released in physical form. It is a blending of music with nature and technology where you can listen, learn and create. In a way, it is the next level of music. The songs stand incredibly well on their own, but interactive music is something completely amazing. Bjork showed that she was really a musical artist, capable of growing along with her art.

I explained it this way the other night: You have Madonna, who does a new image for each album and then you have Bjork. Madonna (who I love) changes her image to stay current. Then you have Bjork who changes because her art is growing.

She showed that you could be a musical artist in modern times. I think the only other artist who comes close is Rufus Wainright. They aren’t merely playing music, they’re in it. Bjork doesn’t need a paint brush. She paints her with her words and her songs.

Needless to say, it was a major shock when my favorite musical artist was coming to Ottawa. I couldn’t believe that she was coming to Bluesfest. I knew She’s come close: Montreal, Toronto, Vancouver, but never close enough. When I heard she was coming here, I was ecstatic. So when my boyfriend got tickets for us to go see her, I was in absolute shock.

I was so shocked that I was almost in disbelief. I literally could not take it in. As the day grew closer, I was thrilled to have it to look forward. This dream come true on the horizon shone like a beacon. I even got my first newspaper in more than ten years just so I could have this:

As the day drew near, I wondered what songs she would sing. I wondered if I could handle the size of the crowd, the pota-potties, the overpriced beer, the walking and the standing. By the time we arrived, it didn’t matter.

Because I was there, at a concert, ready to see Bjork. After a wonderful Sharma, a chocolate dipped banana and some beer, I was pretty close to content. I couldn’t contain my excitement, however

We ended up meeting with an old friend and a new one once we got inside. And then to complete my welcome, there was beer! Always a good thing to have at a concert, I’m told 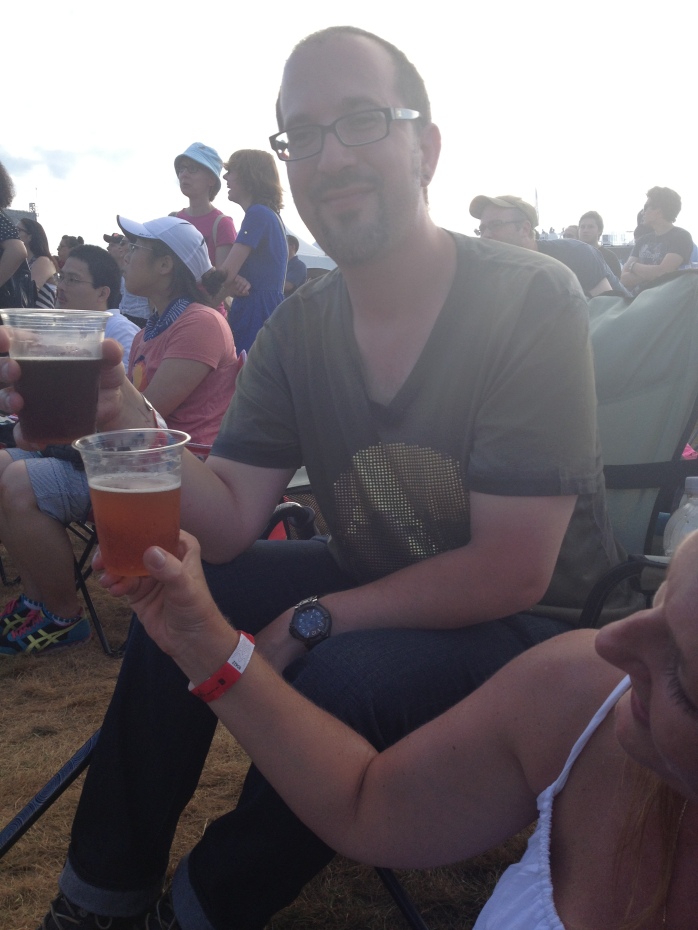 While we waited for Bjork to start, my boyfriend got me beads, another concert must have, judging by how many were being sole. They go really well with my tickets, don’t you think? 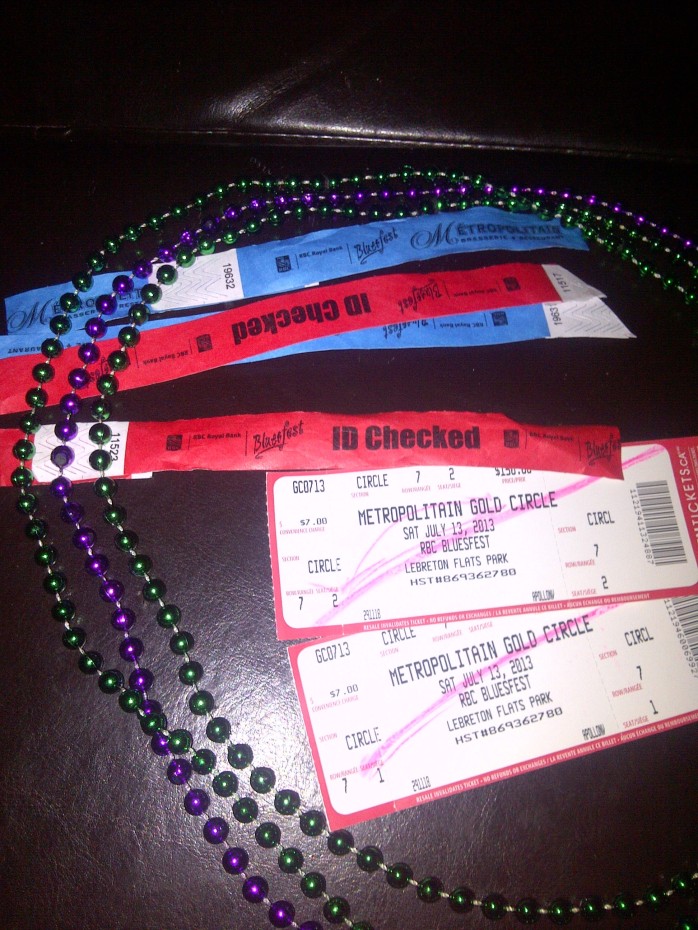 I also got my concert t-shirt before the show started. I didn’t want to wait. Much as I’ve wanted to see Bjork for a long time, I have also wanted a Bjork t shirt. And I got one! So thrilled about that.

Then the show began…and it was as close to Nirvana that I’ll ever see. It was beyond incredible and the set list was across the board. Since this Bluesfest appearance was part of the Biophilia tour, I figured it would revolve around Biophilia, and I wasn’t wrong; but Bjork did songs that spanned almost all of her albums.

This set list is close to what we had. 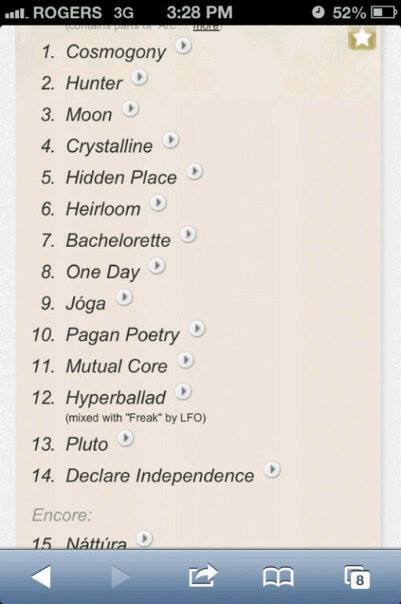 The only notable exceptions are that Pluto and Nattura were part of our set list and Declare Independence was our Encore. And every song was the same, but not. There’s something about listening to it live that just gives it something different, more power.

By the end of the concert, I had sung along to every song. By the end of Declare Independence, I was shaking my fist in the air, part of a crowd of people united in the love for Bjorks music. The crowd was immense, the people wonderful and the spirit catching.

Here’s what part of the crowd looked like. There’s no way I could have gotten it all, there were thousands of people there, I did snap two quick pics of Bjork. She had a proviso up before the concert advising against it, but I had to grab two quick ones:

Thankfully Bjork’s photographer is far better than I am and she posted photos on her site.

As the whole evening was a dream, so was Bjork’s performance. It was energizing, completely inspiring, infectious and incredible beyond words. Several of the songs (Cosmogony, Thunderbolt, Hidden Place, Crystaline and a few others) had video behind the song on large screens from the app. At the end of Pluto, large streams of fire pyrotechnic fire and at one point, it was filled with sparks.

Everything was just as I hoped it would be, beyond that actually. It was enriching, taking in each of Bjork’s lyrical paint strokes one song at a time and I know that seeing the songs perform live will help me remember each song all the better.

By the time Declare Independence came on, I was completely carried away. It was the perfect song to end on and kind of defines Bjork’s career and her spirit. The music thrummed through me and it left me changed and inspired.

And a bit more in love with Bjork’s music then I was before.