The Rolulus Equation by Darren Craske 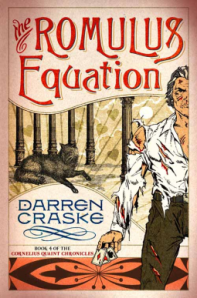 Circus conjuror and magician Cornelius Quaint is a man who wants answers and he will do anything to get them.

After defeating the Chinese warlord Cho-Zen Li and stopping his plan to assassinate Queen Victoria via a deadly plague, the warlord gave Cornelius one piece of vital information: the name of the man who killed his parents.

He knows that they were killed by the Hades Consortium but he doesn’t know why. All his life, he has been haunted by the death of his parents. Now that he knows the man’s name, he plans to hunt him down. Cornelius knows his name is Baron Remus and that he’s stationed in Rome, deep inside the Hades stronghold.

Cornelius knows that he must go to Rome and kill the man who murdered his parents.

Madame Destine, his former governess and the closest thing he has to a mother, begs him not to go. A physic and clairvoyant, she has seen that learning the truth will destroy Cornelius. She aims to watch over him at any cost. She knows that whatever he learns in Rome will be the death of him.

Once again, Cornelius Quaint becomes involved in a plot that involves saving the world in a race against time. All in a day’s work for the immortal conjuror…

I always think the newest Cornelius Quaint book in the series is my favourite, until the next book comes out and blows me away. That is no less true with the Romulus Equation, by far the best book yet in the Cornelius Quaint series. Craske always manages to surpass himself with each book and deliver a thrilling and riveting adventure.

Part of the reason the Quaint books are so awesome is because they work on so many levels: mythology, magic, mystery, thrills, chills and spills. The books are fast and furious reads, mostly because you won’t want to stop reading.

The other reason the books are so incredible is because of the characters. Quaint, Destine, Prometheus. All of them are so real, so alive on the pages, that you can’t help but fall in love with them. This is due to Craske’s masterful skill as an author.

The Romulus Equation takes the series to whole new levels, however, as Quaint delves into his past and changes his future. We also see a side of the conjurer that we haven’t seen before. He has always been willing to do what he could to protect his own neck. The Romulus Equation marks the first time that Quaint sets out to kill someone, to get his revenge.

This new Quaint is a little tougher, but no less charming and there’s no shortage of one liners either. Even though Quaint is on a mission of murder, you can’t help but wish for his success even though it could cost him everything. Takes a brave man to do that.

I’m always amazed at Craske’s skill. Just when you think the story is going in one direction, it goes in a completely different one. However, in The Romulus Equation, all bets are off. My advice to you is to get reading and hold on tight.

It’s going to be on heck of a ride!

← FREE! Blood and Ink – Short Stories
Some Thoughts on 69B – Download the novel for free! →

One Comment on “The Rolulus Equation by Darren Craske”