An Excerpt from Boyfriends 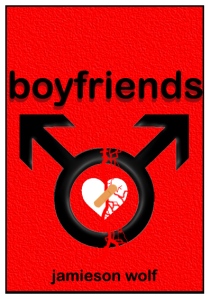 I’ve had  quite a few emails about Boyfriends, my current work in progress. So I thought I’d post an excerpt! Here’s Chapter One to start your weekend off!

There’s some naughty language (gasp!) but it’s not R or X rated. LOL!

“So which one of you fuckers is going to pay for this beer?”

Blaine turned and faced them:

Nancy, the delightful one. He was also incredibly feminine. Fruity, if you will. “I can’t,” he said. “I just picked up a new MAC foundation and the new Brittany CD.” Nancy shrugged as if this should be common knowledge. “I’m fresh out.”

Blaine looked at Chuck. He was always out for a good time. Blaine knew he’d have cash on him. But Chuck shook his head. “Sorry man,” he grinned. “But I got me some K.”

“What the hell is K?” Blaine asked.

“It’s the new thing, apparently.” Chuck said. He looked around and quietly took out a little baggie. “Gives you a whole on body buzz.”

Blaine gagged. “Cat tranquilizer?” Blaine took a sip of his beer to clear the awful taste in his mouth. “Why do you do that to yourself?” Chuck was always trying out new drugs and never turned down an opportunity to experiment. He also had more money than God and the Pope put together. If you’re going to live the lifestyle of an upper class queen, you gotta have the money.

“Well, it’s alright.” Mike said. “But it makes you feel really groggy afterwards. I tried some with a guy I met down at The Cabin.” The Cabin was a happening scene for the young to the middle aged. It was also rumoured to have one of the best cruising bathrooms in the City.

“We did it right there in the bathroom, fucked me in one toilet stalls.” Mike smiled. “William got so huffy when I told him about it last night.” William was Mike’s partner. They explored what would be termed as an Open Relationship. Or, since neither slept with the other, you could call it a Very Open Relationship.

Nancy admired his nail polish. “Well, speak for yourself, but I am a lady.” Nancy snapped his fingers. “Oh hell yeah.”  He turned to face Mike. “So did you? Fuck him beareback?”

“No,” he said, laughing. “He had a condom with him, pulled it out of his pants pocket.”

Blaine laughed. “No one is that prepared.”

“Tell me about it.” Mike said. “I turned to him and asked him ‘Have you done this before?’” He laughed. “Still though, good ride. My ribs hurt a little today.”

Blaine sighed and took another swallow of beer. “Too much information.” He reached for a cigarette off the table and lit it. Inhaled. “You are such a fuckwit.” Blaine sighed again. “So is no one going to help me out here?”

He seemed to be the designated beer wench. Ever single fucking time we go out, he thought. I mean, I really don’t mind. Sometimes you have to pay to have friends. Money makes things easier.

Blaine sighed. Right, keep telling yourself that, he thought. Blaine knew the answer to his question and took out his wallet. “You guys are such fucking assholes, you know that?”

“What’s up with you today anyways?” Mike asked. He ran a finger through his spiked hair to make sure every blonde lock was in place. You must look presentable at all times, after all. “You’ve been all cunty lately.” He reached for one of Blaine’s cigarettes and lit one for himself.

Blaine shrugged. “Just out of it I guess.” I shrugged. “I miss David.”

Nancy sighed. “If I have to listen to another story about how much you miss that nasty man, I’m going to go straight.” He shook a finger at me. “You mind me; I will not suffer through another summer with you talking about how he treats you.” He took a sip of his Mai Tai. “He demeans you,” he said. “There, I’ve said it.”

“Take it easy, Mona.” Chuck said. “Leave the boy alone. He’s just going through a dry spell, is all.”

“Just leave it alone,” Blaine said, turning away. “I don’t want to talk about it.”

“There’s no law against dating is there?” He tried.

Blaine shook my head. “No.”

“Then why are you still alone?” He asked. Nancy was on a role tonight. Once in a while, he latched on to something and never let go until you heard what he said. Some people thought he was a flashy femme queer, but he was more than that. He was intelligent and a brightness was there. Say what you will about him though, the fag knew about fashion.

He reached out and touched my hand. “We just don’t like seeing you so lonely, Blaine.” He Nancy told his friend. “You’re gorgeous; you just have to get back into the game, put yourself back on the market.”

“Maybe I want more than that.” Blaine said. “I’ve seen what’s on the market.”

Nancy shook his head. “Well, honey? What else is there? It’s all about wham bam thank you Stan. Tenderness doesn’t exist.”

Chuck snorted. “Says the man who believes in True Love.” The way he said it, we knew the quotation marks were in place. You could almost see them in the air. “I’ll believe it when I see it.”

“True Love exists.” Nancy said. “You can’t un-prove that. You can prove that there is too much hardness in this City.”  He took another sip of his Mai Tai and reached for a cigarette. “It’s a fact of life.”

Blaine shrugged. “Well maybe I want something more than that.” He whispered. He didn’t think that Nancy had heard him speak, but he did.

“Oh, honey?” Nancy smiled. “You want love don’t you?” He took a drag of his cigarette. “Well, then let me tell you something.” He pointed a finger at Blaine who blinked in surprise at its fierceness. “True Love can’t be found.”

Nancy stubbed out his cigarette. “It finds you.”

Blaine shrugged and took out his wallet to pay for the beer.