Ice Creams at Carrington’s by Alexandra Brown – A Review! 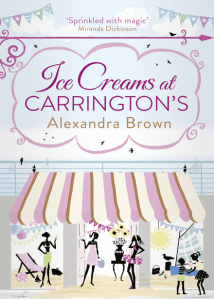 Georgie Hart has it all.

After becoming a reluctant reality television star, her life is completely different. She no longer runs women’s accessories but instead helps the posh customers in the personal shopping department. She also writes columns for a women’s magazine about fashion accessories and what the stars carry in their purses.

It’s a far cry from the days of scrimping and saving, of being in debt up to her eyeballs. A lot of other things have changed in her life too: She’s let her father back into her life and she is in love with Tom Carrington, who may very well be her one.

Yes, life couldn’t be more wonderful…that is until Tom’s mother comes to town for a visit. Giving off a royal air, Georgie is sure that Isabella hates her. Georgie is surprised therefore when she is roped into helping plan the Mulberry-On-Sea’s Regatta, even though she knows nothing about boats or racing.

Her father and Nancy plan to go on a trip across Europe riding in a yellow camper van. Georgie is instantly worried about her fathers health. What if something happens when they are travelling? Added to that, Sam’s going through a rough time with her husband Nathan and she doesn’t seem herself. Deciding to look for a Nanny or a Manny, Sam won’t be prepared for who comes through the door.

However, Georgie plans to do the best she can and raise Isballe’s opinion of her. That is until she gets the opportunity of a lifetime, one too good to pass up. Does she risk everything by taking a chance?

There aren’t enough words to describe how much I love this book. Indeed, all the books in the Carrington’s series are amazing, but Ice Creams at Carrington’s is my favourite by far.

Georgie is growing up. She’s almost thirty now and no longer the same young woman we met at the start of Cupcakes at Carrington’s. She’s still just as fabulous as ever though and just as endearing. All of the other characters we love are there too: Eddie and Ciaran got married in Vegas, Ms. Grace has penned a memoir and has become a literary star.

Everyone is just as we left them at the end of Christmas at Carrington’s…but different. They are growing up. The fact that Alexandra Brown let these characters develop further than the normal caricatures that people chick lit is utterly refreshing. These are people we’ve grown to love and it’s a treat to see them prospering.

Brown also tackles some difficult issues. In Ice Creams at Carrington’s, she tackles commitment issues, post natal depression, gay marriage, Multiple Sclerosis, and more. As well,  tackling subjects that aren’t normally touched upon in chick lit give the book heart and soul and so much warmth in how Brown chooses to deal with all of these subjects.

Now do yourself a favour and go out and get the book…and perhaps an ice cream?