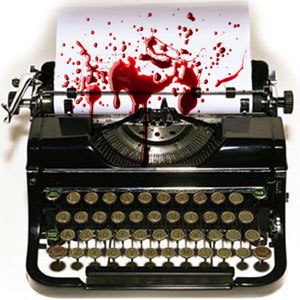 The roar of the water was deafening.

Annie tried to imagine what it must have been like, having this living mass of water nearby as your life came to an end. The only thing was that Annie found that the images didn’t come to her as they should. There was something missing.

She looked at the scene and Detective Saunders looked her. He knew by this time not to disturb her while she observed the scene. Walking around it again, Annie asked “How do the boys in blue figure he died?”

He cleared his throat, as if he were going to make a speech. In a way, he was. Saunders had to yell over the volume of the water running underneath them. “It’s like I told you before, Miss Appleseed. They got a call from an unknown number. A man on the other end of the phone said there was trouble going on at the water dam for the village of Callaway. When they arrived, they found blood at the front door. Following it, they came here.”

Annie motioned at the typewriter that sat on a small wooden table, blood upon some of the keys. “Where they found this.” She said. Bending down, she read what had been typed upon the paper.

Because of him, my heart lies at the bottom of the ravine. Now, he must find it.

She tapped the paper with one finger nail. “Do you know what the note is referring to?”

Saunders nodded. “I assume he’s referring to the murder of Miss Edith Hollis. She was killed and thrown into the self-same ravine ten years ago and her killer was never found.”

Annie kneeled down in front of the typewriter and pressed a few of the keys. The keys let out little click! clack! clicks! “Are we to believe that the person who loved Miss Hollis finally found the killer and exacted his revenge? By throwing the killer in the self-same ravine?” She stood and dusted off her hands. “Everything is tied up all neat, with a lovely red bow, isn’t it, Saunders?”

Annie let out a harrumph. “You should know be well enough by now Saunders. When things look too pretty, it means they are hiding pieces of the puzzle. One missing piece is the fact that this letter was not written on this typewriter.”

“Well, I noticed two things. First of all, look at the paper. It is completely dry. Yet, if you look at the floor around us, it is wet from the spray of the dam, yet not a drop of water has touched this paper. Secondly, this note was not written on this typewriter.”

Saunders looked shocked. “How do you mean, Miss Appleseed?”

“Well, you will notice that the I on this typewriter doesn’t work.” She clacked the I a few times and it let nary a mark on the paper. “That means that the note was written somewhere else and brought here for us to find. Someone has set the stage for us. Mr. Saunders.”

Saunders looked shocked. “To what purpose? Why would someone do that?”

“Why indeed? There are many reasons, each as unlikely as the last. In most cases, we must look for the most obvious reason.”

Walking around the room, the roar of the water seeming to get louder with each step, she pointed at the steps within the dirt. “Look here, Saunders. See those footprints? There are two of them.”

“I don’t think so. The footsteps look as if they are setting things up, as it were. If someone was indeed hurt here and pitched into the waters below, the footsteps would be far more frantic, don’t you think?”

His eyes opened in surprise. “I supposed so, Miss.”

Saunders watched as Annie walked around the room again, watching the play of the footsteps in the dirt floor. “Has this room been examined thoroughly?”

“Then tell me, did they look at this set of footprints?” She pointed to a mess in the dirt.

“I assume so, but they figure that was where the majority of the struggle took place.”

“Then why do the footsteps show someone going in, but no one coming out?”

Saunders looked again at the flow of the footsteps along the floor and saw that she was right. “You seem to be implying that this could be a door of some sort.”

“I’m not implying anything. Your flashlight please, Saunders.”

He took it off his belt and handed it to her. She ran the light along the wall and Saunders noticed something. The light had picked up a small fracture in the wall, shaped like a doorway, yet he saw no handle.

Annie Appleseed rapped on the wall and Saunders heard only the thud of rock. When she thumped on the area that was shaped like a doorway, Saunders heard an echo. It seemed to go on forever.

“Do we know how big this building is?” Annie asked.

“Well, I think we’re about to find out. Press on the wall here, Detective Saunders, please. Give it a good shove, won’t you?”

He did as she asked and was surprised to hear a loud click. The doorway shaped part of the wall was now raised. Annie gently opened the door and they looked into the darkness. There was a light coming from further into the dark and there was the sound of music over the roar of water.

“I believe we may find there was no killer or dead body. I believe they are both in there.”

“Why do you say that, Miss Appleseed?”

She smiled at him. “Love makes us do wonderfully odd things. After you, Detective Saunders. We must not keep them waiting.”

Detective Saunders stepped into the darkness and Annie Appleseed followed.

← Water, Wind and Fire – A Poem
My Story – On Learning to Sparkle →

7 Comments on “The Typewriter Lied – A Flash Fiction Story”