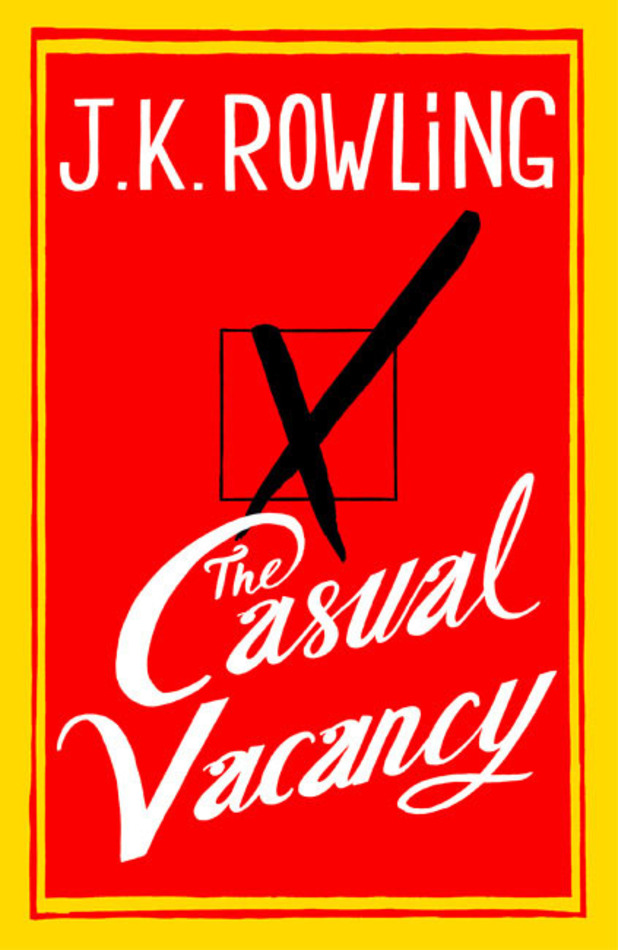 It is a picture perfect little town: rolling hills, ancient abbey, cobbled streets, charming houses and colourful inhabitants. However, like everything that looks perfect, secrets run rampant through Pagford’s streets, waiting for the moment to be set free.

That moment arrives in the death of Barry Fairbrother. After suffering an aneurism on the night of his wedding anniversary, the town of Pagford becomes torn. With Barry’s death, a Casual Vacancy arises, a seat left vacant on the Parish Council due to death.

There are a few hopefuls vying for the coveted seat: Howard Mollison wants his son Miles to take the seat so that Miles can help Howard rid Pagford of The Fields, a rundown part of town home to a methadone clinic. Howard is thrilled at Barry’s death as Howard may finally rid Pagford of an eyesore. Miles’ wife Samantha, however, is less than thrilled and begins to fantasize about much younger boys.

Collin Wall, Deputy Head minister of the local high school, also wants to run for the vacant seat. As Barry’s former best friend, Collin thinks Barry would have wanted him to carry on his work, bringing The Fields and Pagford together, instead of tearing them apart.

Tessa Wall, who is the school guidance counselor, is more concerned over the antics of their son Stuart “Fats” and his association with Krystal Weedon and the mental state of her husband if he actually wins the seat; Collin hides a secret that could ruin him if exposed.

Simon Price also wants to run, despite having isolated himself from the community. His wife, Ruth, approves of him running because she is used to agreeing. It is the only way to keep him from getting angry. Often abusive to his two sons, Andrew “Arf” and Paul, taking in stolen goods and stealing from his place of work, Andrew wonders what would happen to his father if his secrets got out.

Even those not hoping to fill the casual vacancy are affected by Barry Fairbrother’s death: Parminder, who harbors secret feelings of her own, lavishes attention on one daughter while degrading her other daughter Sukhvinder who cuts herself to release the pain. Kay, a social worker who has just been assigned to help Terri Weedon and her children Krystal and Robbie as their mother struggles with heroin addiction.

There’s also Gaia, Kay’s daughter, who is bereft at leaving London because her mother followed her noncommittal boyfriend Gavin Wall to Pagford. Gavin, who knows he never should have let his relationship with Kay go so far is only concerned with ending the relationship and the love he holds close for another woman. Let’s not forget Shirley Mollison, Howard’s wife, who has her own secret agenda or Maureen, Howard’s business partner, who does whatever Howard says; Or what about Mary Fairbrother who had grown to dislike her husband and his growing attachment to Krystal Weedon?

Pagford is a picture perfect little town. Like anything that looks perfect, there is shadow underneath. What would happen if that shadow were exposed? What if the secrets of those in town were exposed, out in public? Would Pagford hold itself together, or would cracks begin to appear in its postcard image?

Before the Casual Vacancy is filled, the town of Pagford will find out and no one will be the same…

I wasn’t expecting to like The Casual Vacancy, much less love it. This has nothing to do with the fact that it’s not the next Harry Potter book. I knew going into The Casual Vacancy to have no expectations because it was decidedly not Harry Potter. Rowling’s first book for adults couldn’t be more different than that other fictional world she created, but a small town political novel just didn’t sound thrilling to me.

There was also the fact that, from the first page, I knew that The Casual Vacancy wasn’t going to be a quick read. The tone of the writing is completely different and I knew it would not feature the wicked fast plot of the Harry Potter novels. However, I read on anyways, knowing that Rowling is a good writer and hoping for a good story.

Well, I was wrong. J K Rowling is an incredible writer and in The Casual Vacancy she had penned an amazing novel with an amazing story. The Casual Vacancy actually has very little to do with the politics surrounding the title. Instead, it is really a study of the people who live in Pagford and the whims of human nature.

I suspect that the title of J K Rowling’s new novel is really a play on words. A Casual Vacancy is a situation in which a political assembly’s seat is declared vacant through resignation, disqualification or death. However, due to the nature of all of Pagford being involved and the possibility of an election that has split the town and those that want the vacant seat for their own ends, there is nothing casual about this vacancy.

As I read, I was reminded of many different authors. If I had to compare it to anything (although Rowling has written it so well that The Casual Vacancy is really incomparable), I would say it’s a mix of Charles Dickens, Maeve Binchy, Minette Walters and Meg Rosoff. The Casual Vacancy is bleak, gut wrenching, horrifying, frightening but also joyful and surprisingly funny. It’s a book that defies genres and boundaries.

Rowling’s strength as a writer has never been more noticeable than with The Casual Vacancy. Her characters are so well drawn that you identify with each and every one of them and the further you read, the more you become involved in their lives. Multiple storylines criss cross and meet up with each other and it takes a writer of the highest caliber to keep all of the intersecting characters and storylines straight and still tell an amazing story.

Surprisingly, the young adult characters in this novel (Andrew, Stuart, Gaia, Shukvinder, Krystal) play a larger role than I thought possible in a “political novel”. Rowling’s adult characters are just as well drawn and as you watch all of their lives intersect, you wonder how Rowling can possibly tie everything together in the end. Thankfully, she does it with grace and style and an ending I never, ever saw coming.

Make no mistake, though, this is an adult novel. In the pages of The Casual Vacancy, you’ll find drugs and drug use, sex, racism, prejudice, rape, theft, poverty, cutting and self-abuse. However, you will also find laughter, humour, joy, determination and hope. It is a novel less about politics than it is about the people who make up a community.

The Casual Vacancy is beautifully written and incredibly told. It is not a novel for the faint of heart, but is also a novel so full of heart that the characters within it will stay with me for the rest of my life. It made me laugh out loud, made me cry in public, had me rooting for some characters and loving to hate others.

It is a book you do not merely read; instead, you live inside of it until the last turn of the page and beyond.

← The Deep Woods Trilogy: Night of Air and Night of Stars!
Woman or Worrior? Or The Carrie in all of us →

One Comment on “The Casual Vacancy by J. K. Rowling”