The Deep Woods Trilogy: Night of Air and Night of Stars! 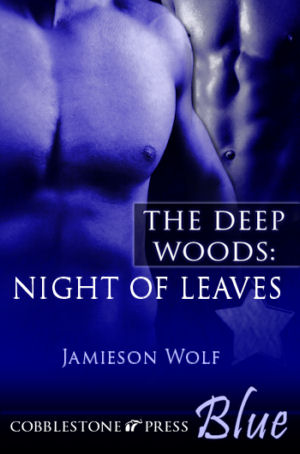 I’m absolutely thrilled and excited to announce that Cobblestone Press has accepted Night of Air and Night of Stars, books Two and Three in the Deep Wood Trilogy. How awesome is that? Here’s the thing: The Deep Woods trilogy is perhaps the hottest thing I have ever written-I mean ever.

And I’ve written a lot of books. Electric Pink and Blue are out now, along with The Raven’s Curse and the Jamieson Wolf Special Edition (I just love saying that) are all available from Breathless Press, with In the Dead of Night coming soon. Check that out here:

The Deep Woods Book One: Night of Leaves is already available from Cobblestone Press. You can start the story here:

While I will be knee deep in edits with Night of Air, Night of Stars and In the Dead of Night respectively. Coming up, there will also be a Christmas (or Yule if you prefer) surprise. I hope it rocks. I have yet to tackle it.

In the meantime, there will be Talking Poems and Train to look forward to, both serial works that will continue, regardless of any editing I have to do.

However, with four books out and three on the way at the moment, that’s a lot of reading you need to catch up on. Dive in, have fun, that’s why I wrote them.

To celebrate, here’s the blurb for the whole Deep Wood Trilogy. Enjoy!

Nicolas has always had a secret desire for his closest friend Jackson but he can never act upon it. In Salem of 1692, men do not love other men. Nicolas suffers with his secret…until the night he finds Jackson inside his house, waiting for him.

Jackson tells him that he has been chosen by a Goddess to be one of her protectors and that there is only one way to quicken the magic that lies dormant inside of Nicolas: They must lie with each other.

When Nicolas’ magic does quicken, the Guardian’s of Diana are threatened by the most dangerous of dark forces: the Shadows. They seek to destroy the Goddess and the very earth itself.

Can Nicolas find the strength inside of him to use his magic and save humanity? Or will he lose the man he loves forever?

Check out The Deep Woods Book One: Night of Stars here:

For less than your morning cup of coffee, you can have a hot story to start your day on your way to work. And then have coffee at work. I’m not saying you should cut out your coffee completely. Let’s not get hasty here…