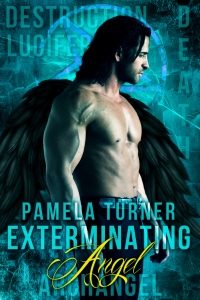 I’m thrilled to welcome Pamela Turner to my blog to talk about her new book Exterminating Angel! Take it away Pamela!

To be honest, I’m never quite sure where I get my ideas for my stories. Many stem from “What if?” questions, song lyrics, or pictures. Once the book is written, it’s like my memory is wiped clean, made ready for a new story. Funny, though, the stories I haven’t written? I can tell you exactly what inspired the idea. Yeah, I’m weird that way.

But I digress. Exterminating Angel began in 20ll, shortly after my first angel paranormal short novel, Death Sword, was published. Then, I only had the one book, and a best-selling published romantic-suspense author advised me I needed a back list.

Who was I to argue? During my research on angelology, I’d learned there was a fine line between good and evil. And this inspired me to write a story about an archangel whose devotion to duty forced him to make a decision that would change his life. The logline for Exterminating Angel came to me full-blown, as if it had always been there, waiting for me to discover it. “When an archangel unwittingly unleashes a demon upon the city, he must enlist the help of Lucifer to stop it.”

Shortly thereafter, Stoker-award winning author John Everson came to Louisville for a book signing at the local Barnes and Noble. I told him my story idea and he said go for it.

I never looked back. Those were powerful words, filling me with hope and determination.  It took several drafts, and even a revise and resubmit, but on April 1, 2013, I received a contract from Lyrical Press. Yes, at first I thought it was an April Fool’s joke, but happily that proved to not be the case.

This because I never lost sight of the advice I was given. Even when I struggled through the drafts, determination to succeed drove me forward. I believed in my story, loved my characters, wanted to share my vision.

That dream became reality on May 5 of this year.

It’s been a fun ride. I’ve enjoyed it so much, I’ve written a spin off, Hell on Earth, which is currently undergoing revisions before I submit it to beta readers. This is Raziel’s story, and pits him and the demon brigadier-general Sargatanas against the demon Asmodeus.

Who knew writing about angels could be so much fun?

Making a deal with the Devil is the least of his problems.

Zaphkiel, a chain-smoking, hard-drinking archangel, never intended to unleash the sun demon upon the city. Bad enough his boss wants him dead, and this recent crime is the perfect excuse. The timing couldn’t be worse. Somehow, Zaphkiel’s executed lover, Caliel, is alive and reincarnated as Sean. Zaphkiel is thrilled to be reunited with Caliel again, but will his lover feel the same when he learns Zaphkiel’s darkest secret?

Hired by Lucifer, Sean wants nothing more than to fit in. But how can he compete when the Devil’s friends include archangels and a Tarot reader, and he was born without special abilities? Or so he believes. The Tarot hints there may be more to him than he realizes.

Recruited by the Devil to find the two pentacles sun demon Sorath plans to use to destroy the universe, Zaphkiel and Sean find themselves pawns in a game of power and control. If the archangel gives his boss the pentacles, Ophaniel will overlook his crime. But Zaphkiel knows he can’t trust either Ophaniel or Sorath, and the deal he’s made with the Devil could cost him not only his life, but also the lover he believed gone forever.

Stay tuned for my review!!!

← Talking to the Sky is FREE for five days!
The Power of Forgetting – A Poem →