First off, you totally rocked. I have been so fortunate and so blessed this year. In 2014, I my new year’s resolution was to live more and I’ve certainly kept that up! I’m so blessed to be living the life I have and equally blessed by everyone I have in my life.

This year was all about growth for me and deepening my interaction with the world. It certainly was a banner year and I got to see and do so much! I learned a lot about myself along the way and learned what I was truly capable of.

It was a hard year, though. We lost a lot of people this year, celebrities and otherwise. 2016 seemed to be a year written by George R. R. Martin or Stephen King. Though there were a few low points in the year, but that was counterbalanced by the amazing and wonderful things I got to experience and that the amazing people I know. I am truly blessed.

The time after Christmas is always hard, but I was comforted by the friends around me and Michael. I was also hard at work on the second book in what became the Lemonade trilogy! It’s amazing to me still that a little idea I had for a novella has grown into one book and has spawned a second, plus ideas for a third and fourth.

It was well received and I think it’s my strongest book of poems yet and I’m so proud of Dancing with the Flame. My poetry has touched so many lives, more than any other thing I’ve written. 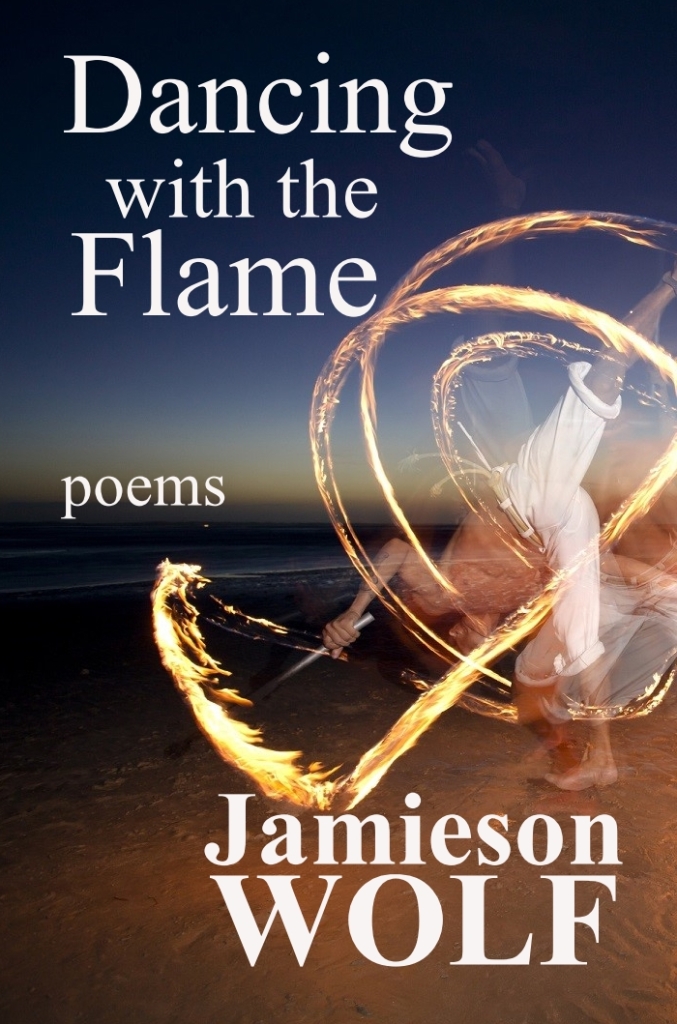 March was spent waiting for Winter to be over and Spring to begin.

In April, Michael and I celebrated our second anniversary!

It’s hard to believe we’ve been together that long. I still feel like I met him last month. Even though we’ve travelled the world and I have the pictures to prove it, what Michael and I have together feels timeless.

I walked the MS Walk again this year! I managed to walk 5Km in just over an hour, a 10 minute improvement to last years walk. I’m so thankful for everyone that walked with me. Together, we raised close to $1000 to help end Multiple Sclerosis. I’m so proud of all of us. We all rock.

I also had my divorce party! I’ve waited seven years to be divorced from my ex-husband and it finally happened! How awesome is that? Here I am with my divorce cake. 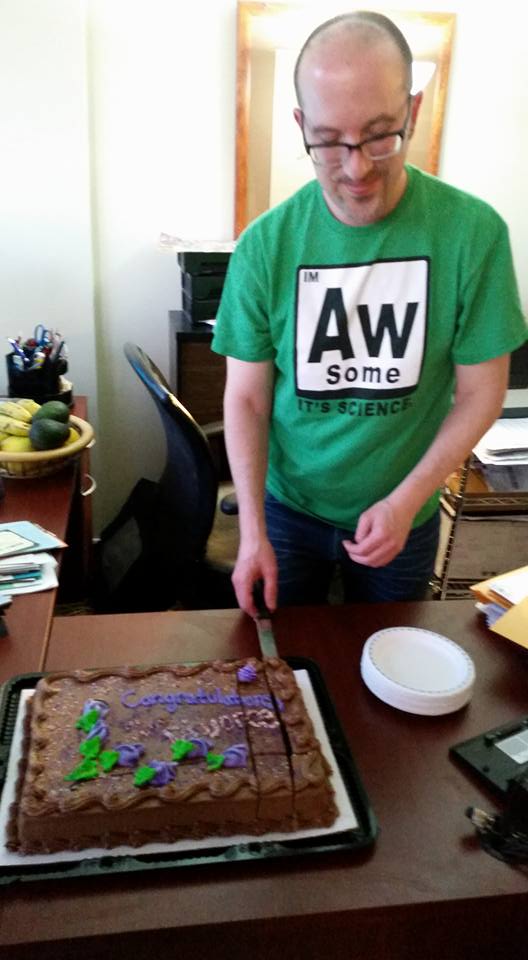 This month was spent waiting for Summer to arrive and watching everything grow. The world was filled with sudden, bright colour.

I was thrilled to be asked to take part in Prose in the Park as part of their poetry event. It was a whole evening of different poets reciting their work.

This was the first time that I’ve read my poetry in public. It’s one thing having people read it off the page; it’s something else entirely. I was so nervous! Thankfully, it went well and the response from the other poets and the public was wonderful.

In July, Michael and I finally set up my office!

It’s the first time I’ve had one. I’ve always had my computer shoved into a corner somewhere. I can write anywhere. But Michael wanted me to have a room of my own where I could work on my writing and paintings and where I could do my workouts.

Well, in July we succeeded in turning the second bedroom into my office! I finally have a room of my own and my art hangs on the walls. It was a glorious moment for me and every time I walk in to the room, I am stunned. 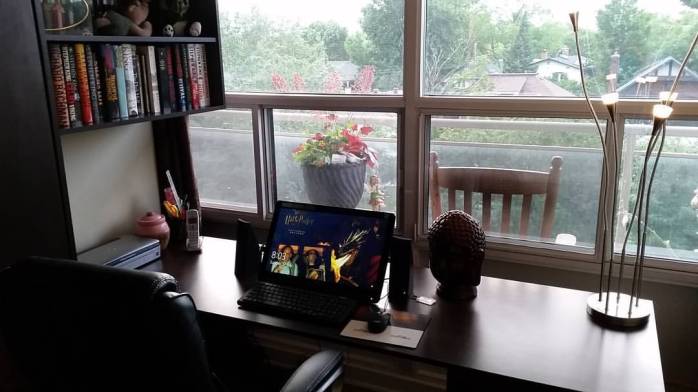 For my Birthday this year, Michael took me to Los Angeles! I’ve never been and it was always a dream to go.

While we were there, we went to Disney Land and to the new Wizarding World of Harry Potter! The whole trip felt like some kind of dream and I am beyond grateful. We also went to Malibu and Santa Monica!

It truly was a magical trip!

We had been planning a commitment ceremony but Michael felt (rightly so!) that if we were going through all the motions and doing everything but getting married, we should just get married.

I was stunned when he asked me to marry him and could only kiss him. I hoped that with each kiss, I could communicate what I couldn’t find words to say.

Afterwards, Michael said “So is that a yes?”

I also had my latest appointment with my Neurologist. All my lesions have shrunk to the size of peas when before, they were the size of golf balls. They were also greyed out instead of brilliant, bright white. She took down all the information about what I’ve been doing to better myself (diet, exercise, Reiki, mediation, essential oils) in hopes that it will benefit someone else.

In October, I signed with Renaissance Press! They will be publishing Lust and Lemonade, the first book in the Lemonade books, in late Spring, early Summer, 2017. I couldn’t be happier with Renaissance Press and the treatment they are giving my book is beyond lovely. It feels like I’m part of a family and it’s like I’ve come home.

Here is everyone at this years Christmas party! 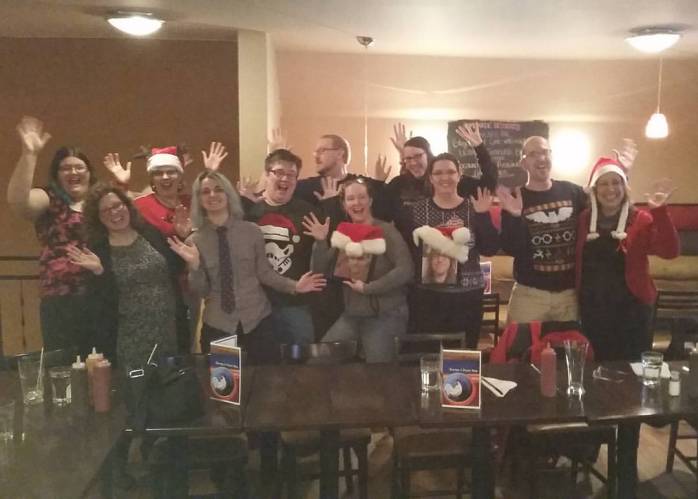 In November, we went to Cuba!

This year, we went to Veradero and took a daytrip to Havana. It was amazing, seeing buildings that have existed since the 1400’s, being surrounded by a different culture. It felt like stepping back in time.

And it was the first time I swam in the ocean! We got to ride in old style cars from the 1940’s and the 1950’s. The food was amazing and the people were wonderful. The whole vacation felt like time stood still and as if it would only begin again when we left.

I can’t wait to go back.

In December, I released my newest holiday novella called The Greatest Gift. This was a really special one for me in that it dealt with those that have passed still being with us. That though they aren’t in our lives anymore, they are still here in our hearts.

Here’s a bit about the novella:

Lincon is living inside of himself.

Having lost his partner Xander three years ago, on December 24th, he is a shell of his former self. His only comfort can be found in a circle of stone where he can hear Xander’s voice. His friend, Dava, tries to get him to engage with life again, telling him that Xander would have wanted him to be happy.

Lincon is content to live out the rest of his life by not living. What he needs is a miracle. That miracle comes in the form of an angel. Those we have loved are closer to us then we could even dream. Having watched his lover drift further inside himself, Xander knows he must do something, but what can he do?

Gabriel is the one that tells him to find someone for Lincon, someone who shines bright. If Xander should find someone, how does he make sure they meet?

Thankfully, miracles do happen at Christmas…

You can download your copy for FREE here: https://www.smashwords.com/books/view/687873

That’s the year long wrap up for 2016! I know that I am truly blessed and so very fortunate to be living the life I have. I can’t wait for 2017! It’s going to bring its own share of awesome!