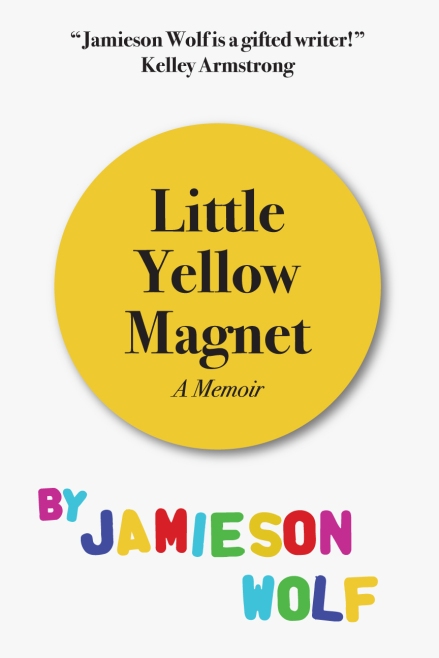 It goes without saying that Little Yellow Magnet was a difficult book to write. It was also the most rewarding.

When I first started writing it, I called Little Yellow Magnet my little book of positivity. The idea behind it at first was to write about the positive moments during my journey with multiple sclerosis. The only problem was, I only got to page twenty-seven before I realized I was going about it all wrong.

From the moment I woke on January 31st, 2012 with my body no longer my own to the moment I had the idea to start writing about it; well that was all part of my journey. To focus on only the positive elements of that journey would be doing myself a disservice.

Every step along my path, every moment until now was all part of my journey. I couldn’t just write about the part of it that left me elated. I had to write about everything. This filled me with some trepidation.

Like every writer, I put myself into everything I write. Certain characters are based off of me or events that happened in my life are used in my books. However, that is all done with the smoke screen of fiction. I’m a bit more open when I write poetry, trying to make sense of something, but there is always some sort of poetic licence there.

With a memoir, it would be me on the page with no smokescreen, no great giant head of OZ to hide behind. It would be me, completely and in truth. That was clear to me. If I was going to write this, if I was going to go down the road that I have travelled, there would be no sugar coating of anything.

I took a moment to pause before I put my fingers to the keyboard again. My journey deals with a lot of other issues other than my diagnosis of multiple sclerosis. It talks about already living with cerebral palsy, mental abuse, depression, suicide attempts, dating in the gay community while also having a disability.

I had good long think about whether writing it would be a good idea. I came to the conclusion that, at the very least, it would be a cathartic release for me, a closing off of one chapter and the beginning of a new one. Then, if I did decide to publish it, my hope was that it would help people. There are so many others that are dealing with so many things I’ve touched on in Little Yellow Magnet: dramatic changes, disease, depression, abuse. If the book helps even one person, than that makes everything worth it.

I learned a lot about myself through the writing of Little Yellow Magnet. Having my journey laid out on paper, it was impossible not to. I can’t wait for you all to read it yourselves. It seems amazing that the memoir is almost a reality and that other people will be able to read it.

It’s not that long away now. I can’t believe that, after a year of writing and a year of exits and preparation, that Little Yellow Magnet is almost here. It’s available on March 21st, 2019.

Thanks for being part of the journey.